The last time I did outdoor-sketching I experimented with painting directly from the watercolour pans, using a water brush pen only. I quite liked the spontaneity and the type of lines and other "accidents" that I could get with this method, so I wondered if I could use the same sort of wet medium (the water brush pen) but with the colour already "loaded" in, so that I could draw and draw and not worry about reloading the brush with more colour from the pans. 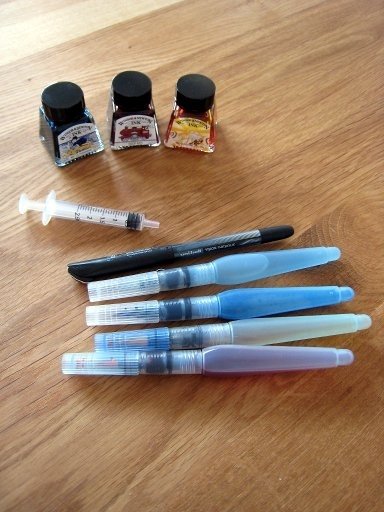 I had bought three more water brush pens "just in case" and was itching to use them, and also had several bottles of Winsor and Newton drawing ink, so this seemed like a perfect opportunity! (SHAMELESS PLUG: actually these were the inks I used for Unsolicited letters in the 1800s)

What I did get too was a small syringe from the pharmacist, for loading the ink into the brushes without making a mess. It seems you can buy special syringes online, for loading ink into fountain pens, and those syringes have a blunt needle so you can't get harmed or harm your fountain, but it was just cheaper to get it here: locally made and locally sold :-)

I removed the needle, and also tried to not to look at it too much, as needles scare me! But I didn't dispose of it, because I want to use it for refilling an Ahab fountain pen that I can't manage to fill with its inbuilt piston mechanism. But I'm digressing!

Back to my tests: I thought I would prepare a versatile palette which would allow me to mix the colours and generate many more shades. So I chose yellow, red and blue. In theory this "should" work, right? Or at least approximate to the CMY print scheme (Cyan / Magenta / Yellow - yeah, I left the blacK out!). 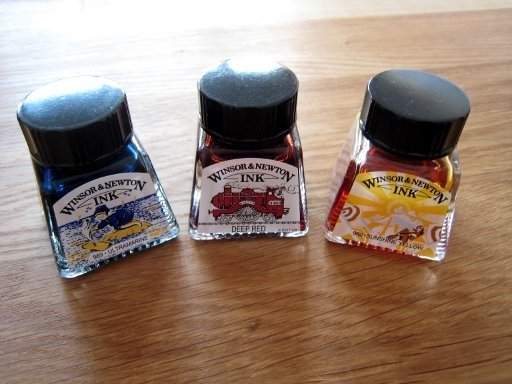 But it didn't, because the blue is not cyan, but "969 Ultramarine", and the red is no magenta, but "deep red". Evidently that would not allow for things such as the ever-lovely turquoise colour (a pity, because it's one of my favourites!), but I wanted to try anyway, so I went a little crazy over a sheet of paper: 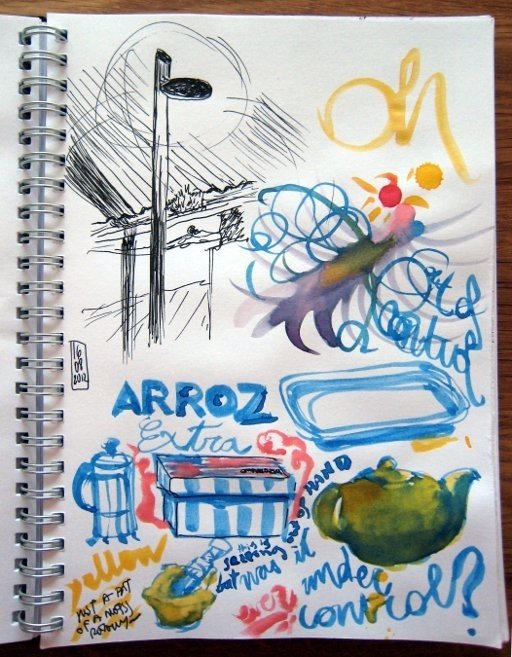 As you can see, and as we expected, the colours were a bit more toned down than if we had used more primary colours. The other problem is that the ink doesn't seem to want to mix with the other inks. This could be a fault of the paper, which might be absorbing ink too quickly. The other issue is that except the blue-loaded brush pen, the other two were pretty thick, and due to the way I hold the brushes I was actually pressing on the reserve, so I got several accidental drops in the paper--that I tried to use to my benefit ;-)-- and generally the brushes were a tad too overloaded with ink, so everything was pretty much out of control.

Here's a detail of the area where I truly attempted to mix colours, and where I got a couple of accidental drops too.
I like the curly blue lines, and the "Oh" with its accompanying yellow drop too, but the greenish-yellowish-violet stain is just gross. 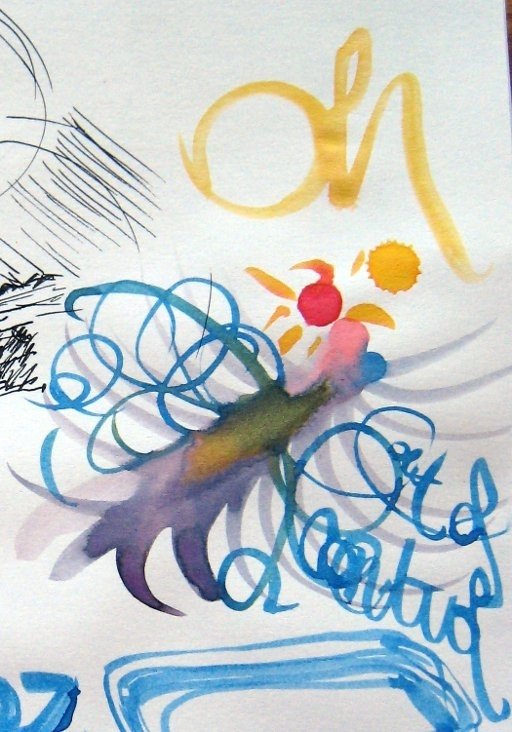 (By the way, I guess you can tell I was doing tests in the kitchen--just by looking at all those kitchen thingies in the drawing!) 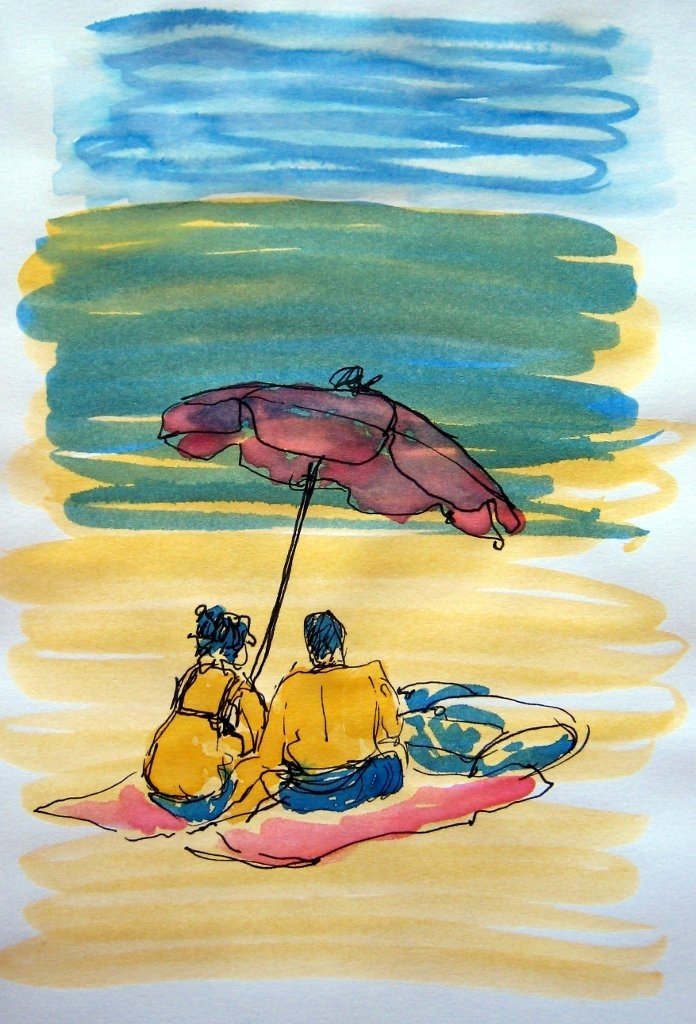 On Sunday we made an impromptu visit to a beach we had never been before, yet had passed by many times already (with the train): Garraf, an small port-village close to Sitges, and which was famous (to me) because Krampack was in part filmed there, so I was really looking forward to visit it and do a bit of movie-location-spotting.

Once that was done (it didn't took long as the place is very small) and we had lunch we went to the beach itself, where I took the opportunity to do another test with my "primary" colours array. This time I thought that, since the media didn't lend itself to detailed, intricate work, I would use wider strokes and not worry much about detail.

So I drew this sitting couple under the sunshade, and "went crazy" again, as I applied a layer of yellow to most of the page, not really caring about accuracy. I decided I would use the half top of it as base for mixing blue and getting a sort of turquoise-aquamarine colour, but what happened is that the sun was burning SO HOT that the yellow ink had almost dried when I applied the blue one, so they didn't quite mix as I expected!

Therefore I thought I would wet the entire "sky" area with plain water before applying the blue ink, but maybe I didn't wet it enough, as the ink seemed to be absorbed quite quickly and didn't spread as much as I expected. Booh!

I hadn't used the red ink yet, and the bodies were empty! At this point, looking for proper, realistic colours, was a bit silly. So I just coloured the rest as I felt: more yellow for giving some sort of volume to the bodies, red for the sunshade and towels, and blue for hair, bikini and swimsuits.

I like the result, although it's not exactly what I had in mind, but looks nice. It also reminds me to old duotone-printed comics which tended to use raw, plain colours instead of moire-based gradients. I think this technique could work with a little more practise, so I might experiment in more settings and with more ink colours, as I still have four more bottles to use. And since I already discarded realistic colouring, I can use crazy combinations such as "Brilliant green", "Purple" and yellow.

I'm also happy that I found a brand of 0.5 pens that are really waterproof and not only "sort of water resistant". The one I used on this drawing is a Mitsubishi uni-ball 0.5 vision needle micro. Its label says "waterproof/fade-proof", and so far it's not feathering when I apply water afterwards. It's not a roller ball pen, but it's got one of those metallic points, like the early Pilot Hi-Tecpoint V5 we all know and sometimes love. I would say the ink in the Vision needle is a bit more liquid than in the Pilot, so it flows well.

Prior to this I attempted to use Mitsubishi uni-ball eye micro (notice "eye" instead of "vision needle") and those were not waterproof, even if their label said so. Water-resistant maybe. Though you could get some nice results, if feathered black lines is what you're after!

Now for a couple of bonus drawings:

I made these first drawings while waiting for and in the train to Garraf. There is always peculiar people on trains. There's also an small drawing by Mr. doob here, and a drawing of Mr.doob too. If you think you found them, send me an email or mention me on twitter with your guess ;-) 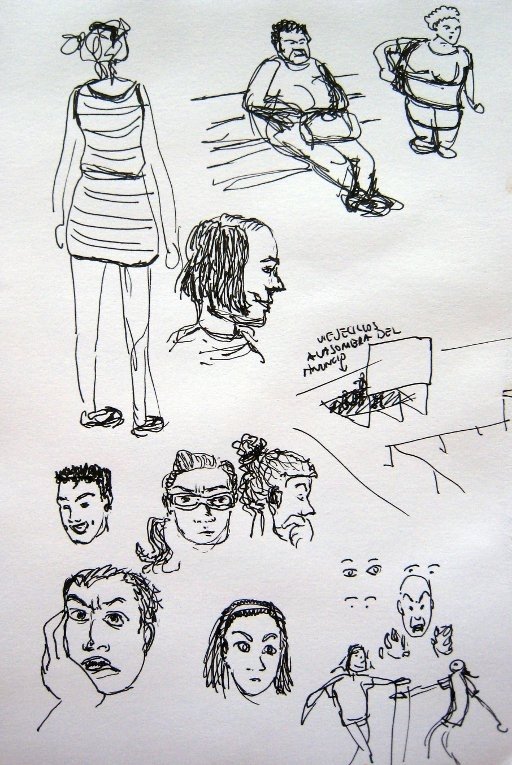 I am going to be visiting my old town while its Moros y cristianos festivities take place, and I'd love to sketch those while there, so I looked for some "Moros y Cristianos" parade videos on YouTube and attempted to draw them as a "drawing on location" training. That is, without pausing the videos, which would have been too easy ;-) 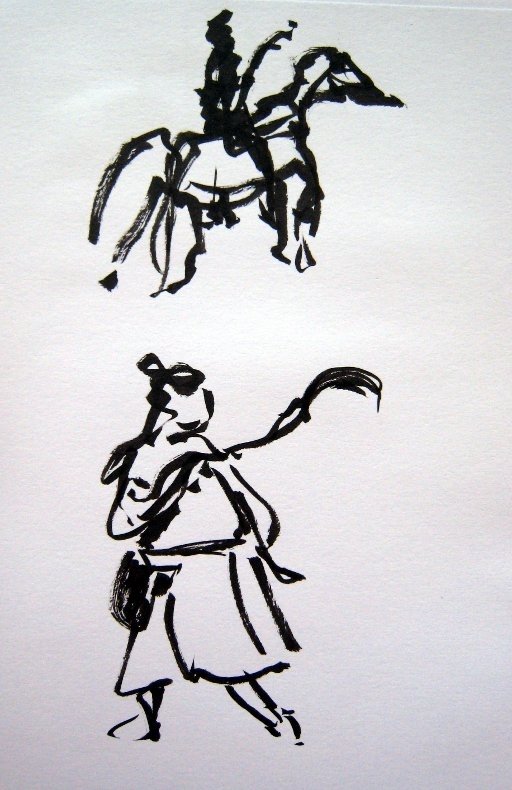 Funnily, I remembered that I loved to draw the characters of the parade and everything surrounding the festival when I was a child. I started drawing as soon as they installed the street light decorations, and back then those were made up of bulbs, not LED strips like nowadays. So imagine me meticulously drawing each one of the bulbs in my depiction of the street, and because it was a perspective drawing of a long avenue, then drawing the same motif, and the same, and the same, each one with its bulbs, until they faded in the distance. Oh what a good fun it was! Then I would colour them with .REALLY. .STRONG. .STROKES. of yellow, red and sometimes green CONTE crayons. Most of the bulbs were transparent, yellow and red (I didn't fill the transparent ones). They used green exceptionally, when they wanted to depict a leaf, although most of the times they just depicted half moons and crosses, so they didn't need many more colours. Still, green bulbs mystified me :-)

I think I didn't keep any of those drawings, so I'll try to do a new one, but only if the decorations are bulb-based!